Polyfunctional ligands containing 9,10-dihydroanthracene were synthesized in order to consider a π coordination to the metal centers and the modularity of the succinic anhydride heterocycle leads to a dative coordination.

Thus, ruthenium polymetallic complexes and heteropolymetallic complexes Pd(II)/Ru(II) have been prepared and fully characterized, including X-ray diffraction analysis of single crystal. The observed catalytic reactivity is due to cooperative effects between metals, as evidenced by electrochemical studies and modeling (Organometallics 2014, 33, 1812 ; Dalton Trans. 2013, 42, 1136). 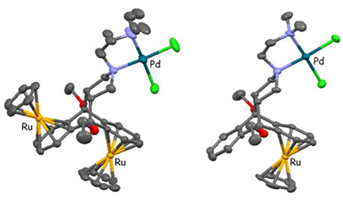 The surface reactivity of metallic nanoparticles is especially studied by looking at the mode of attachment of the ligands and substrate at the surface, for example in hydrogenation reactions. NMR experiments, including DOSY and NOE, showed the coordination of stabilizers and substrates at the ruthenium nanoparticle surface (Chem. Commun. 2008, 3296 ; Top. Catal. 2013, 56, 1253). Also, interactions with an imidazolium cation were highlighted by DOSY experiments (Magn. Reson. Chem. 2008, 739). 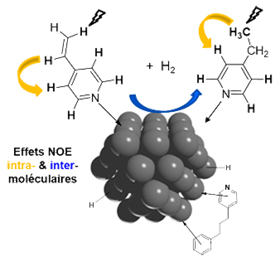