The transformation of molecules by introduction of atomic elements is one of the most fundamental reactions in chemistry. For low valency elements such as hydrogen or oxygen, these reactions (hydrogenation, epoxidation…) are well established and numerous reactants or catalysts are available for chemists. For elements with higher valency like nitrogen or carbon, available tools for this type of reaction are much rarer because of the number of bonds that needs to be broken then rebuilt.

This observation lead us to develop atomic carbon complex 1 stabilized by two different donating ligands (L:→C←:L’), which are in fact bis-ylides (Angew. Chem. Int. Ed. 2010, 49, 6798). The incorporation of two types of ylide in one molecule results in a very rich reactivity.. 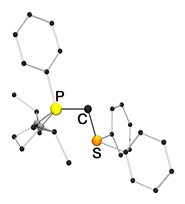 Bis-ylides 1 reacts with carbonylated derivatives to form oxaphosphetanes, which are classical intermediate of Wittig type reaction. In presence of a Lewis acid such as CuOTf, a cummulene is obtained in which the two central carbon were extracted from bis-ylide 1. Interestingly, in presence of a bifunctionnal derivative that bears an acidic hydrogen, a complex bicyclic structure is generated. In this case, bis-ylide central carbon was transferred in a sp3 hybridation.

Our current research are moving towards the development of new atomic carbon complexes to release elemental carbon in milder conditions. To do this, we seek to vary the nature and combination of L ligands. This should lead us to discover new reactivities.